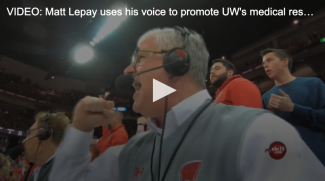 Voice of the Wisconsin Badgers, Matt Lepay, is raising awareness of Alzheimer's disease and promoting researchers at the UW through a new public service announcement. In the message, Lepay, who lost his mother to Alzheimer’s disease in 2017, talks about his mother’s disease and why it inspired him to share his family’s story. The PSA is running on iHeart radio stations throughout Wisconsin.

A news story about Lepay featured UW Health memory care doctor and Alzheimer’s disease researcher Nathaniel Chin, MD. Chin lost his father to Alzheimer’s disease in 2018 and related to Lepay’s story. “As someone who’s experienced the disease himself, watching my dad go through it, it is a very personal and emotional journey,” Chin says.