What is Alzheimer's disease?

Alzheimer's disease is a progressive brain disease that causes declines in memory and thinking skills. In late-stage Alzheimer’s disease, the person is unable to care for themselves and requires 24-hour care.

We all forget sometimes, but Alzheimer’s disease is not a normal part of aging. It is not unusual for individuals to occasionally misplace their car keys or forget an acquaintance’s name. However, if such forgetting begins to affect your daily life, it is important to see your doctor. An early diagnosis of Alzheimer’s disease is very important. 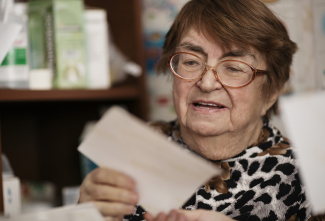 What is mild cognitive impairment?

Mild cognitive impairment (MCI) is an intermediate stage between the expected cognitive decline of normal aging and the more pronounced decline of dementia. People with MCI have more memory problems than other people their age, but their symptoms are not as severe as those associated with Alzheimer's disease. People with MCI are still able to carry out their normal daily activities. MCI may progress to Alzheimer's disease, however some patients regain normal memory and cognition, while others may remain stable with MCI for years. Signs of MCI include:

Do we know what causes Alzheimer's disease?

Scientists still are not certain. Several risk factors, such as age and family history, have been identified as potential risk factors but cannot alone cause the disease. Each year, scientists are uncovering important new clues about potential causes of the disease, which is helping to find better diagnostic and treatment options.

Does everyone who forgets have Alzheimer's disease?

No. Everyone's memory is different, and we remember certain things better than others. It is not unusual for individuals to misplace their car keys; however, when it begins to affect your activities of daily living (work or social life), it is more than memory loss due to normal aging.

If one of my parents had a type of dementia does that mean I'll develop it too?

Researchers are exploring the role of genetics in the development of Alzheimer's disease, but most agree the disease is likely caused by a variety of factors. The National Institute on Aging offers a Fact Sheet on Alzheimer's Disease Genetics.

Researchers here at the University of Wisconsin-Madison are studying the interplay between genetic and lifestyle risk factors. Much of this research is done through the Wisconsin ADRC and the Wisconsin Registry for Alzheimer's Prevention (WRAP).

What are the potential treatments for Alzheimer's disease?

What can I do to lower my risk for developing Alzheimer’s disease?

Scientists have found evidence that some lifestyle changes can delay the onset of symptoms or lower risk for Alzheimer's disease. Visit our Prevention webpage for guidance and more information.

What are the latest findings in Alzheimer's disease research?

The Wisconsin Alzheimer's Disease Research Center is committed to educating the community about the latest updates in Alzheimer's disease research through our outreach events, newsletters, podcast and direct discussion with our research participants. Information on research advances can also be found at Alzforum and Being Patient, both news sources for dementia and brain health research news. In addition to clinical trials conducted in partnership with the Wisconsin Alzheimer's Disease Research Center, information on clinical trials for people both with and without memory problems can be obtained by visiting the following websites: Alzheimer's Disease Education and Referral Center (ADEAR) Clinical Trials, the Alzheimer's Association TrialMatch, and ClinicalTrials.gov.

Are there DNA tests to determine risk for Alzheimer’s disease?

The role DNA plays in Alzheimer’s disease risk is complicated, and you should discuss your decision to take a test, as well as the results, with a health care provider.

Researchers have found associations between genetic variants of the apolipoprotein E (APOE) gene and risk for later-onset Alzheimer’s disease (symptoms occur at age 65 or older). APOE comes in several different forms, or alleles. Each person inherits two APOE alleles, one from each biological parent. (The National Institute on Aging offers a simple explanation of the different alleles and their protective and risk effects.) APOE genetic tests are available through private companies that offer direct-to-consumer testing. Please be aware that when you seek testing through a private company, you are sharing your genetic information with a business. Review carefully the terms and conditions regarding what these companies can do with your genetic information. An APOE genetic test will not tell you if you will get dementia. In fact, only 40% of people who develop Alzheimer’s disease carry the APOE allele associated with increased risk for the disease.

The Dementia Matters podcast episode “DNA Is Not Your Destiny: Genetics and Alzheimer’s Disease Risk” offers insight into the genetic and environmental factors that play a role in Alzheimer’s disease risk. You can listen to the episode or read the transcript of the interview on our website.

Alzheimers.gov is the U.S. government's free information resource about Alzheimer's disease and related dementias, with links to authoritative, up-to-date information from agencies and organizations with expertise in these areas.

Alzheimer’s Disease Facts and Figures, comprehensive information about the state of Alzheimer's disease, from the Alzheimer’s Association.

Women and Alzheimer's Disease is a site from the Alzheimer's Association that highlights the unique challenges women face in Alzheimer's disease and caregiving.

The National Library of Medicine offers a collection of thousands of articles and other literature related to Alzheimer’s disease, compiled by the National Institutes of Health.

What is Alzheimer's Disease? a four-minute TED Ed video that describes how Alzheimer's affects the brain, shedding light on the disease's different stages.

Being Patient offers the latest news on Alzheimer's disease and brain health research.

Next Avenue is a project of PBS that offers news and information for people over 50; it writes about Alzheimer's disease and dementia topics, as well as caregiving.