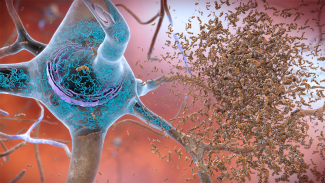 While the FDA did not give a full approval, it has proceeded to allow aducanumab to be used in clinical settings. If the drug is not shown to be effective in this “real world” setting, the FDA can remove its approval.

“Aducanumab is not a cure for Alzheimer’s disease and will not stop the progression of the disease," says Nathaniel Chin, MD, medical director for the Wisconsin ADRC. "But the data from one of the main studies show it offers a 22% reduced decline in cognitive and functional changes over 18 months.”

It is important to note there are other causes of mild cognitive impairment and dementia. If a person has one of these non-Alzheimer’s disease causes, the drug will not be helpful or an option for treatment. "People should discuss their diagnosis and suspected cause with their providers," Chin says. "And most importantly, people should continue to build a strong network of support and care because this drug is not a silver bullet."

Learn more about aducanumab from the FDA:

The aducanumab approval has been celebrated by some and criticized by others. The New York Times wrote about the controversy in its article “F.D.A. Approves Alzheimer’s Drug Despite Fierce Debate Over Whether It Works” (published June 7, 20201).

What does aducanumab do?

It attaches to beta amyloid proteins in the brain and removes them.

Who can receive this treatment?

The FDA has approved this drug for people with Alzheimer’s disease. Eligible patients must have confirmed amyloid in their brains to be considered for this treatment. While doctors can prescribe this treatment for any stage of cognitive impairment, a thorough discussion is needed to determine the benefits and risks.

How is the drug administered?

Through an infusion. The infusion will take approximately 1 hour and will occur every 4 weeks.

How much does aducanumab cost?

When will it be available to patients?

We do not know at this time. An infrastructure will need to be built so that the medication can be properly administered and patients can be properly followed afterward.

Are there side effects?

The most common side effects were brain swelling and bleeding, headache, fall, diarrhea, and confusion/delirium/altered mental status/disorientation.

Chin spoke to multiple Wisconsin media outlets about the FDA’s approval of aducanumab. Read and watch these stories in the links below.

"Debate among experts over newly approved Alzheimer’s drug" aired on WMTV NBC 15 in Madison on June 7, 2021.

"Experts hope Alzheimer’s drug encourages Wisconsin adults to get tested for the disease" aired on WSAW-TV CBS 7 in Wausau on June 7, 2021.

"Families, doctors hopeful after news of new drug to slow progression of Alzheimer’s" aired on WBAY ABC 2 in Green Bay on June 8, 2021.

Art Walaszek, MD, was a guest on Wisconsin Public Radio where he discussed aducanumab and Alzheimer's disease. "FDA Approves New Drug For Alzheimer's Disease" aired on "The Morning Show" on June 9, 2021.