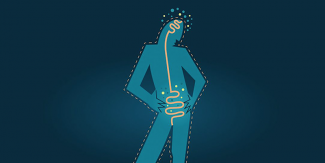 The age-related processes that contribute to Alzheimer’s disease development remain largely unknown, but a team of University of Wisconsin–Madison researchers believes that the composition of an individual’s gut microbiome may contribute to brain changes that lead to neurodegenerative diseases. Barbara Bendlin, PhD, Federico Rey, PhD, and Tyler Ulland, PhD, recently received funding from the National Institutes of Health (NIH) to support their project, “Gut barrier function in Alzheimer’s disease.” The 5-year grant is expected to total $2,429,319.

Gut microbiome is a term used to describe the trillions of microorganisms that live in an individual’s intestinal tract. This includes mainly bacteria, but also viruses, protozoa and fungi.

Bendlin, Rey and Ulland have been studying the role of the gut microbiome in the development of Alzheimer’s disease for over five years. They previously found that people with Alzheimer’s disease dementia had reduced diversity, or fewer kinds of microorganisms, in their gut microbiota compared to people of the same age who were cognitively unimpaired. The researchers also found that the abundance of certain bacteria differ between people with and without dementia.

This new project will expand on the team’s prior work in order to understand how changes in gut microbiome composition affects the development of Alzheimer’s disease. More specifically, the researchers hypothesize that age-related gut dysbiosis, or imbalance of microbiota, acts to weaken gut barrier function. Further, they predict that when gut barrier function is disrupted, bacterial products may then trigger an immune response and system-wide changes that exacerbate the Alzheimer’s disease process.

To test their hypothesis, Bendlin, Rey and Ulland will be studying participants who are enrolled in the Wisconsin Alzheimer’s Disease Research Center to understand how the gut may impact the brain, even before the development of dementia. They will also study gnotobiotic mice that overproduce amyloid, the abnormal protein which accumulates in Alzheimer’s disease, as a research model to better understand the exact mechanisms linking changes in the gut to changes in the brain.

The other key characteristic of the researchers’ model is that the mice are gnotobiotic, meaning that the animals start out germ-free. These mice have no microorganisms living in or on them because they are raised in a controlled environment that prevents their exposure to bacterial, viral or other parasitic agents. Researchers can control which types of  microorganisms are introduced into the guts of the gnotobiotic mice.

Overall, the successful completion of these experiments is expected to support the development of new therapeutic strategies for Alzheimer’s disease and related dementias. The researchers said the ultimate goal of this research is to help people who are living with Alzheimer’s disease, as well as reduce or prevent the risk of developing this devastating disease for others in the future.