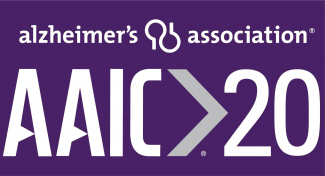 In total, UW Alzheimer’s disease researchers delivered more than 60 presentations throughout the event.

The conference, which was originally scheduled to take place in Amsterdam, Netherlands, was streamed online for free. As the largest international meeting dedicated to the sharing and dissemination of dementia science, AAIC attracts researchers from around the globe.

Below are four studies UW researchers presented at the virtual conference:

A study team led by Kimberly Mueller, PhD, assistant professor in the UW Department of Communication Sciences and Disorders and School of Medicine and Public Health, found people who reported higher levels of social engagement as they aged performed better on speech and language tests than people who participated in fewer social activities or who didn’t change their activity levels over time.

In this study, Mueller and her research team compared speech samples from study participants in the Wisconsin Registry for Alzheimer’s Prevention with their level of social activity. They found people who reported higher levels of social engagement demonstrated better speech fluency and higher efficiency in expressing ideas than other people in the study. Some of the activities measured in this study included playing board games, attending religious services, spending time writing and talking to friends and family, and participating in group classes and social clubs.

Changes in speech have long been connected with changes in memory and thinking skills. Mueller and her research team will continue their research to learn if social engagement can affect a person’s risk for developing Alzheimer’s disease.

Researchers from the Wisconsin Alzheimer’s Institute have developed a training method to help caregivers identify dementia in people with intellectual disabilities.

The study, performed by Art Walaszek, MD, professor of psychiatry and his research team in collaboration with researchers at the UW School of Nursing, Gundersen Health System and Aptiv Inc., developed the educational curriculum using the National Task Group Early Detection Screen for Dementia (NTG-EDSD) to increase caregivers’ ability to detect dementia.

By age 40, almost all people with Down syndrome exhibit symptoms of Alzheimer’s disease. Yet, despite its pervasiveness, Alzheimer’s remains a difficult disease to detect in this population because baseline cognitive impairment due to Down syndrome can be severe, and patients may have difficulty self-reporting symptoms.

With more than 150 participants including direct care workers, healthcare providers and social services staff, only 20% indicated they were “very” or “quite confident” in using the NTG-EDSD tool for dementia detection before participating. However, after the training sessions, 94% agreed that they could use the screening tool with their clients and many reported increased confidence in their ability to detect functional decline.

This study extends previous work examining neighborhood disadvantage as it relates to cerebral and hippocampal volume by tracking changes in cortical structure and cognitive ability over time.

Certain areas of the cerebral cortex ‒ the outer region of folded grey matter in the brain ‒ are prone to thinning in early Alzheimer’s disease. This cortical thinning can be measured using structural MRI scans.

Researchers from the Wisconsin Alzheimer’s Disease Research Center (ADRC) and the UW School of Medicine and Public Health found that nearly half of all tested geriatric memory patients lacked one or more common vitamin that affects memory and thinking skills. Of the vitamins tested, 37% of patients were deficient in B6, which is critical for the synthesis of neurotransmitters like serotonin, dopamine and epinephrine, as well as the synthesis of hemoglobin, a key protein in red blood cells. And 33% were deficient in vitamin D, which contributes to healthy bones, skin and metabolism.

“Our study shows that many memory patients do have significant deficiencies in vitamins that affect memory,” said Anna Przybelski, a student researcher at the Wisconsin ADRC, who completed the study. “Treating these deficiencies is critical for improving memory function and efficient response to memory treatments.”

The researchers studied the results of vitamins B1, B6, B12 and D tests from approximately 200 patients during their first visits to a memory clinic. Of all tested patients, 40% lacked one key vitamin, and one in five patients lacked two vitamins. While vitamin B12 levels are commonly tested in geriatric patients, only 16% were deficient, and the less commonly tested B6 and D both had deficiency rates above 30%.